If you are still using the legacy version 5.x of IMatch, you are missing out on many awesome new features and useful enhancements added over the past years.

What Has Changed Since IMatch 5?

While IMatch 2019 looks and feels very similar to IMatch 5, literally hundreds of changes have been made to it since version 5. Many features have been introduced and existing functionality has been improved based on user feedback. We work closely together with our users in the IMatch community to make IMatch better all the time.

Of course we've also fixed many bugs since version 5. Components and tools provided by third party vendors have been updated regularly. This not only enhanced system stability and performance, but also fixed several critical issues in the IMatch database system and other security-sensitive features.

What You are Missing

These pages list all major enhancements and changes introduced in versions following IMatch 5:

Many Good Reasons To Upgrade!

If you are still using IMatch 5, there are many good reasons to upgrade:

Upgrading to the latest IMatch version is easy and takes only a few minutes.
See Easy Upgrade on the right for more information.
IMatch 2019 Hardware and Software Requirements

Got a Coupon Code?

Great. This will save you some money.  Just enter your coupon code during the order process: 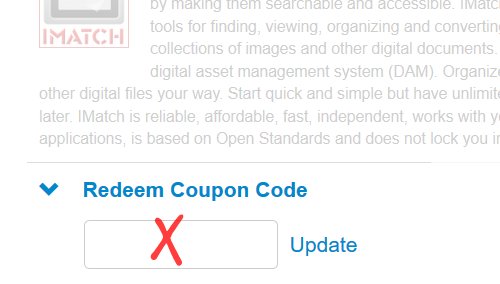 IMatch is only available for 64-bit versions of Microsoft Windows. If you are still using a 32-bit edition of Windows, you cannot use IMatch.

Upgrading to IMatch 2019 is easy and takes only a few minutes. IMatch 2019 works with your existing IMatch 5 and later databases and settings.

1. Click on the button below to open the IMatch order page
2. Enter your Coupon Code to claim your discount
3. After your order is complete, our distributor sends you an email with your license key and instructions
4. Log into the customer portal with your new license key and download IMatch 2019

Support for the old Basic Scripting has been discontinued in IMatch 2017. IMatch now uses modern programming technologies based on open standards like HTML, JavaScript and IMatch Anywhere WebServices™.