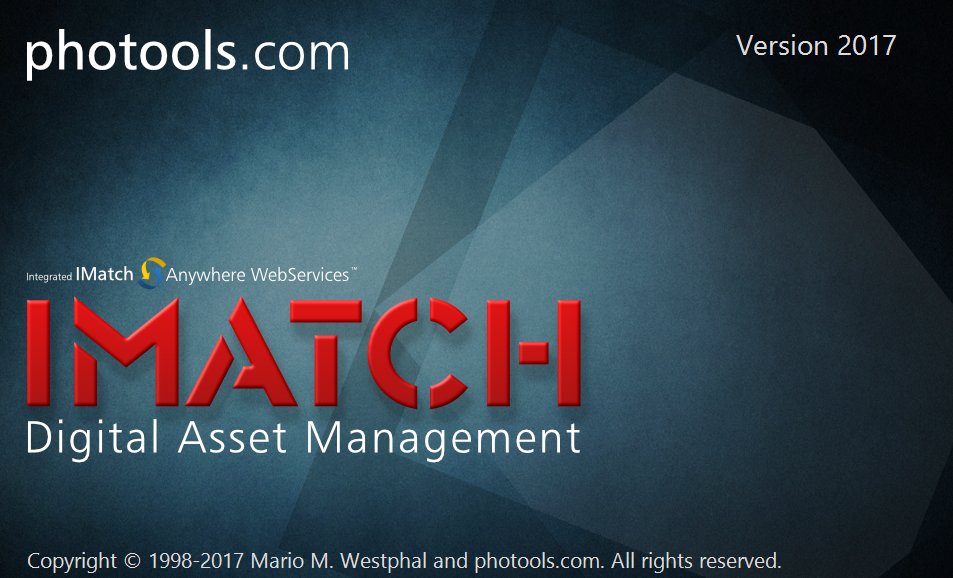 We are very happy to announce IMatch 2017 – the latest edition of our award-winning digital asset management software.
IMatch 2017 will be released shortly. Watch this web site for the announcement.

The Even Easier DAM:  Over 50 New Features and Enhancements!

IMatch uses an agile development model. This means that updates are shipped often (about every six to eight weeks) and that the updates not only include bug fixes but also enhancements and new features. This is the best development model for users, because they get new features and bug fixes very quickly. Sometimes only a weeks or two pass between a feature being requested and its inclusion in IMatch, or bug fixes are shipped over night.

For the big IMatch 2017 upgrade, we did a lot work on the core of IMatch, to make it even more reliable, robust, fast and ready for the future.

IMatch 2017 is the first version that includes IMatch Anywhere™ technology.  This allowed us to integrate powerful web technologies and a new state-of-the art scripting environment based on modern web technologies. IMatch can now be automated and enhanced using apps written in JavaScript and HTML. See below for some new features we’ve built with this awesome technology.

We’ve also added a ton of new features to this release: Better support for videos of all kinds, dynamic video previews in the File Window, a much improved Map Panel and many other frequently requested features for categories, versions etc. See the reminder of this page for details.

Just download and install IMatch 2017. No special upgrade procedure is required. IMatch 2017 even installs side-by-side with IMatch 5, if you want to keep IMatch around 5 for a while…

Six months after the release of IMatch 2017, support for IMatch 5.5+ will be discontinued. No support will be given to this old versions and no updates will be made available anymore.

There are dozens of smaller and larger enhancements in this release. Here are some of the most notable changes:

Improved Support for Videos and Movies

Video becomes more important all the time. All modern cameras can produce HD or even 4K video streams. IMatch users asked for improved video support in IMatch 2017. We listened and delivered. IMatch 2017 can produce thumbnails and animated previews for a much wider range of current and older video formats. You can now see previews of your videos right in the File Window:.

IMatch 2017 also adds new metadata attributes and variables for video-related data, like a cross-format duration variable which allows you to show the runtime of videos in the file window and elsewhere.

IMatch 2017 contains a new category technology which reduces the memory requirements by about 80%, while retaining the same performance and feature set as before.

For large databases with hundreds of thousands of files and large category sets, the amount of memory required by the old category technology could grow excessively, to several hundred megabytes or more. With the new category system IMatch is now able to handle even very large databases with massive category sets comfortably. And this leaves more RAM for memory-hungry features like the Viewer or the Design & Print system.

An often requested feature was an option to show only files directly assigned to the selected category – without explicitly including the files assigned to child categories. This enhancement has been implemented in IMatch 2017 as an extension to the hierarchy display mode: 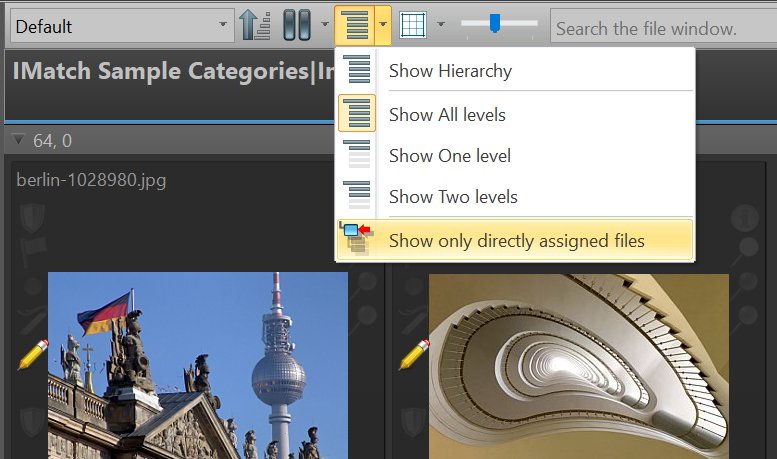 If you enable this option, IMatch shows only the files directly assigned to the selected categories, filtering out files in child categories automatically.

The master image in the following example has three versions. In our version setup, we enabled the .tif version to use the new version proxy attribute.

If the stack is collapsed, the TIF image is used to represent the stack. All other data (file name etc.) still comes from the master, as before:

We released of our new IMatch Anywhere™ product line in January. This IMatch add-on enables users to access their IMatch databases remotely, from any device and operating system. Locally, over a network or even over the Internet.

Now we integrated parts of this technology into IMatch for Windows. By including IMatch WebServices™ into IMatch 2017, we could replace the aging BASIC scripting language with modern and state-of-the art scripting and web technologies. This makes it easier and faster to develop enhancements and apps for IMatch 2017. IMatch scripts can no be written in JavaScript and any other language that can use web services: Java, C#, Go, Python. Even in Windows PowerShell, …

The programming interfaces are now identical for IMatch and IMatch Anywhere. This means we and you can write scripts and apps which run both in IMatch and with IMatch WebServices. Whether IMatch WebServices are running on the same computer as your app, or on a server thousands of miles away!

The integrated web browser in IMatch is no longer based on the Internet Explorer web component integrated in Windows. Instead IMatch 2017 uses the modern, secure and super-fast Chromium open source web browser – the same browser engine Google uses for their Chrome web browser! This is one of the central components for all the new features based on web technologies in IMatch 2017.

What is all this good for? Well, Apps!

We replaced all standard IMatch BASIC scripts with updated versions, created entirely using JavaScript and HTML. These apps not only much run faster, but also have easy and comfortable user interfaces. It was impossible to create such slick user interfaces with the old legacy BASIC scripting system.

We’ve also created 20 or more example scripts and apps, documentation and tutorials to show interested users how to access IMatch and IMatch databases from JavaScript or Windows PowerShell. See the IMatch Developer Center for additional information.

The old Script Manager has been replaced by the neat App Manager. You launch every installed app from this single panel. Re-arrange the apps to bring your favorite apps to the top. If you are a developer, open the app in an external web browser or open the folder containing the app in Windows Explorer.

Tip: You can create IMatch Favorites for apps, to run them with a single mouse-click or a keyboard shortcut.

A lot of work went into the new Map Panel.It is a breeze to use and makes viewing and displaying files with embedded GPS data super-easy. Many IMatch users work with GPS data embedded in files, and the new Map Panel adds many often requested features.

The new quick selection feature enables you to search your database for files taken in a certain area. Want to find all images taken in London, Berlin Australia or your neighborhood? Now only a matter of seconds.

The Map Panel also learned how to import track logs in GPX format. It can display one or multiple tracks directly on the map, and use the coordinates contained in the track to add GPS data to your images. No external software needed for this purpose anymore.

IMatch now also supports clustering of file sets taken at the same location. This is helpful when you take many files in one spot. The information popups can handle file clusters as well and allow you to navigate between all files in a cluster.

Thumbnails on the Map

Instead of just simple pins, the Map Panel can now also optionally display thumbnails of your files: 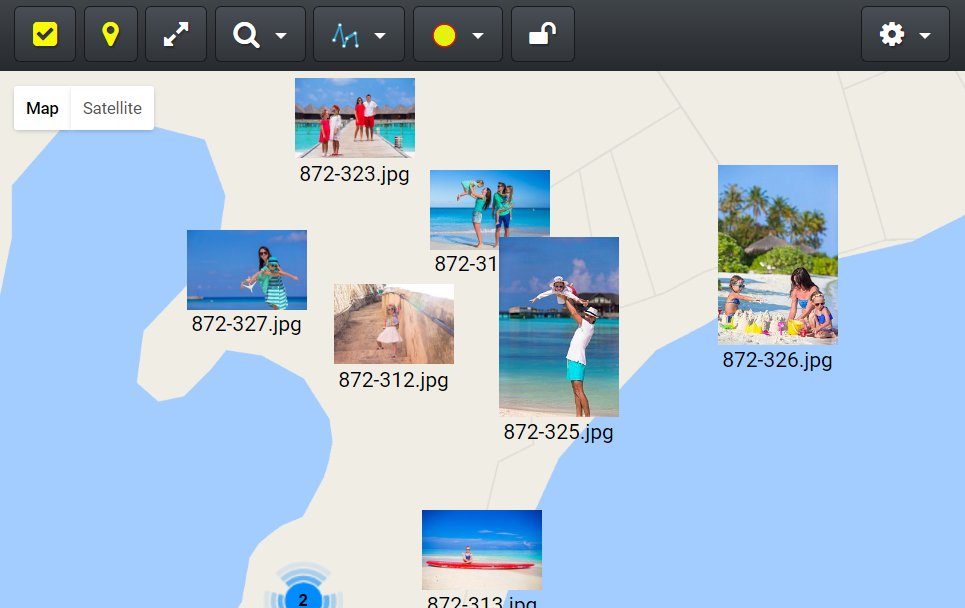 The new Map Panel has been designed to work with large file sets. Loading and rendering 5,000 files on a map? No problem:

The always useful Copy Data App has been redesigned and now comes with built-in support for QR codes: 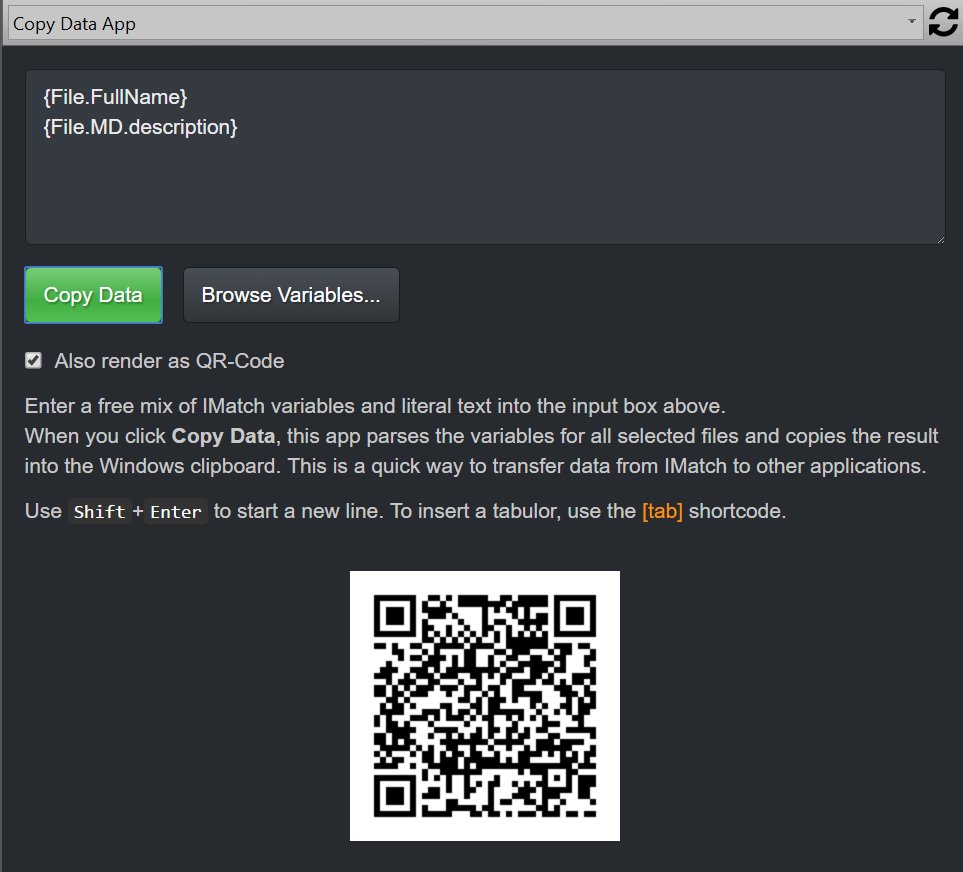 Quickly find the folders occupying the most space. The categories with the most files. How many images you took per country. Which cameras or lenses you use most…

Like all IMatch 2017 apps, this app is included with full source code. If you are into statistics or you like to visualize things, use this app as a framework for your own experiments with the D3 library. 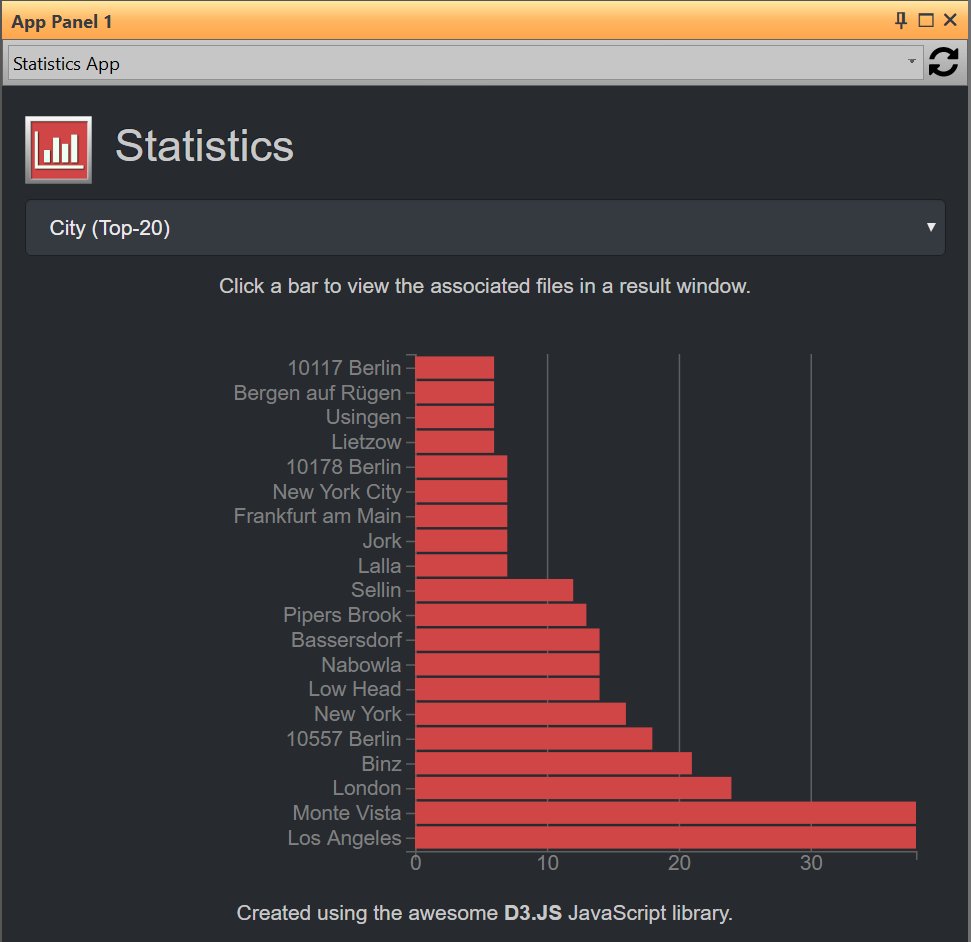 Many bugs have been fixed for this version, including some long-standing ones that haunted users from time to time. We highly recommend to upgrade to this version.

This makes it easier for users who first want to try out IMatch 2017, or who want to migrate their existing legacy BASIC scripts to the new scripting environment in IMatch 2017. IMatch 2017 uses a separate set of configuration files and presets. This means that both applications work with their own settings and don’t interfere with each other. Note that you cannot run IMatch 5.5 and IMatch 2017 simultaneously.

The integrated database system has been upgraded and streamlined for IMatch 2017. It supports all the new features of IMatch 2017 and implements IMWS, the new low-memory category system and video feature support.

When IMatch 2017 opens an existing IMatch database for the first time, it automatically upgrades the database to the new format. This process is quick and does not require user intervention. After the upgrade, the database is no longer compatible with the old IMatch 5.5 format. You will see a corresponding warning when you open the database in IMatch 2017.